Thank you for taking the time to read this annual report, and participate in the ongoing vibrancy of our city. Below, you will find some updates on the work I have been doing on your behalf and a form to provide your suggestions for priorities and projects in the coming year.

Making public information available to the public through the internet.

In the 2019 Budget, which the City Council passed on November 29th, the Council Majority worked successfully to include funding for an online 311 platform such as SeeClickFix to allow residents to report and track progress on repairing potholes, illegal dumping, litter, and other quality of life issues. In the coming year, I will be working closely with the administration and department staff to implement this system — not only to increase the transparency and responsiveness to your concerns, but also to make managing city resources and response more efficient and effective.

I am working with the Zoning Board of Appeals and Planning Commission Staff to create maps that show the projects that come before those boards, so that neighbors can more easily find and stay informed about development in their neighborhoods.

Also, the 2019 budget, the City Council funded several important parks improvements. First and foremost among them, the needed funds to restore and re-open the South Troy pool, and to start the design process to re-build the Knickerbacker Pool in Lansingburgh. We also included funding for some upgrades and improvements to the 112th St. Park and the Ingalls Ave Parks in Lansingburgh and North Central. Our capital plan for the coming years outlines continued capital projects in other neighborhood parks throughout the city. 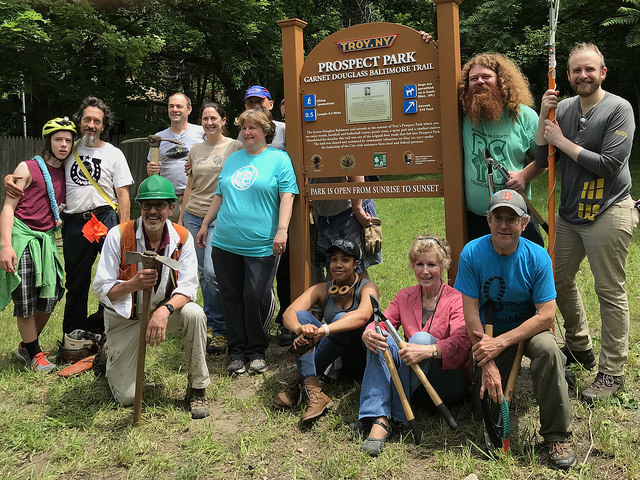 This spring, with the support of the National Park Service and many local volunteers, I helped the planning department conduct a trail clearing, and officially opened the Garnet Douglass Baltimore Trail in Prospect Park. This is the latest in a network of trails which are planned to connect our neighborhoods throughout the city with the natural environments that surround them.

Keep an eye out for more such projects this spring and sign up here if you are interested in helping out with a portion of the trail network.

Check out the map below which I made with District 4 resident Adam Siemiginowski, of The Hill at Muza, and explore these trails that connect our neighborhoods through vibrant natural spaces:

The City of Troy has a seemingly endless supply of aging infrastructure, for which I continue to support strategic reinvestment. This year, the Water Department undertook several important upgrades to our water towers and waterlines within the city, and launched one of the largest public infrastructure projects in Troy's recent history: The replacement of the 7 mile long water line that brings water from the Tomhannock Reservoir to our city water treatment plant. I was happy to support that initiative, and thrilled that the state recently added their support in the form of a $10M Grant, which will help reduce the long-term financial impact of this project on residents. 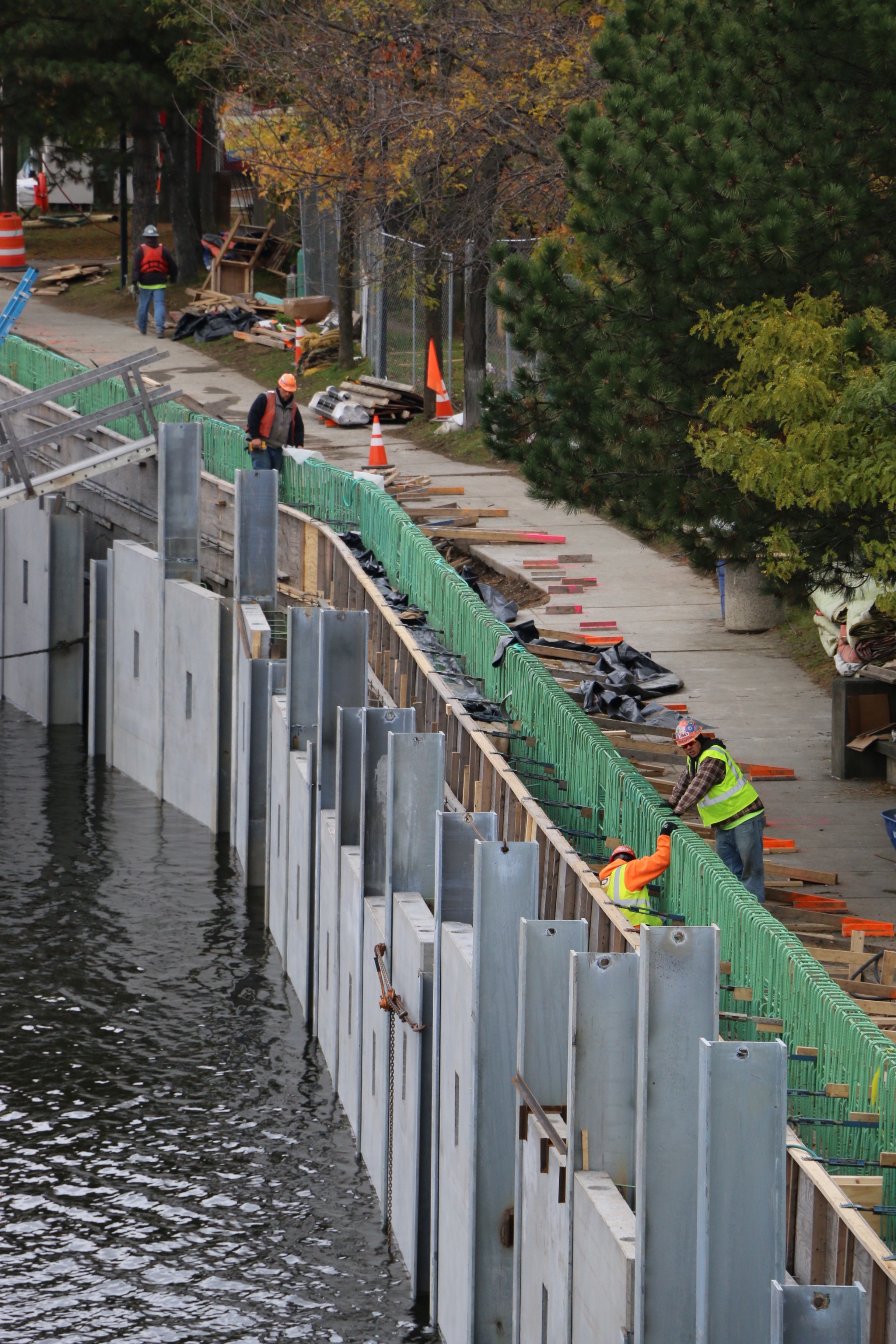 Another significant project I was excited to support this year, was the reconstruction of the sea wall, which protects our downtown and the County sewer main from encroachment and flooding in the Hudson. Not only is this critical to protect from increased flooding risk along the Hudson River, but it will also provide much better public access to the waterfront with an improved marina. Having previously served as the assistant dockmaster of the Troy Marina, I know first hand the value that this provides to our downtown, welcoming in boaters from around the region and around the world. As an avid kayaker, I know the benefits an improved marina, along with the recent upgrades to the Ingalls Ave Boat Launch, will provide to residents downtown and throughout Troy by re-connecting us with the waterway that flows past our shores.

Here is a video and some photos of the ground breaking ceremony for the Ingalls Ave. Boat Launch improvements:

I also supported a comprehensive assessment of our energy systems in Troy, which we are looking forward to the final report from soon. I expect this assessment to be the first step towards modernizing our street lights with LEDs to increase public safety and energy efficiency throughout the city.

I continue to research broadband internet infrastructure options, and am in search of a few passionate individuals to help us develop a plan to improve internet service, reliability and affordability in Troy. If you or someone you know may be interested, please visit troyplan.org for more information.

The administration has also started some comprehensive analysis of our aging fleet of municipal vehicles, and the council has supported strategic re-investment in police vehicles, an ambulance, a fire pumper, a street sweeper, plow trucks, maintenance trucks and equipment, and two new trash collection vehicles. These are critical to increasing the quality of service to residents throughout the city, and reducing the costs of maintenance and down time from the many vehicles which are well beyond their useful life.

I am honored to support the ongoing growth of our downtown, and the many ways it serves the whole city. I have continued to push for increased commercial space in the face of investment focused primarily on residential development. I was disappointed by the planning commission and IDA approval of a major residential development I opposed on King Street which did not contain any commercial space on the ground floor, despite a growing business sector in that neighborhood. This is not to say that residential development is not also needed, but I am still struggling to find the right balance. As we continue to see more people living downtown, I have been glad to see a concurrent increase in vibrancy on the street in many areas. Welcome to all of our new residents!

The Redevelopment of Monument Square has been a major focus of city staff ever since the old city hall building there was torn down. After several RFP processes where developers proposed possible solutions, the Madden Administration decided to approach development in a new way, with increased focus on the needs and desires of residents and business owners here. This took the form of a series of meetings and a design charrette process resulted in some broad consensus around a vision for the future of this space. As we move towards developing a set of buildings there in line with this vision, I will continue to push towards programming that enhances our downtown in new ways. In particular, I have been advocating for a Children's Museum on this site, to pair with the extensive riverfront park improvements in making Downtown Troy a destination for families throughout the region. Just as important, this is part of a broader strategy to make sure Troy — which currently has the youngest average population in the Capital Region — strengthens is place as a city where families are eager to stay and raise their kids as they grow.

I am also thrilled that the AI Center of Excellence proposed for Downtown Troy recently received $337,000 from Empire State Development to move that $2 Million Dollar Project forward. This is squarely in line with the vision of Troy that many people, including me, have been advocating for for years. A vision in which Troy's Downtown technology sector continues to grow, honoring our history of inventing and making new things in Troy, driven by partnerships with local educational institutions.

For the first time in 3 years, the City Council passed a balanced budget on time, with limited tax and fee increases and without postponing significant financial responsibilities until the future. Unlike the 2016 Budget, which postponed several million dollars in Pension Obligations, the 2017 Budget which had to deal with that through significant tax increases, or the 2018 budget which further increased costs through a garbage fee, this year's 2019 budget stays below the rate of inflation with the 2% Tax Cap. We also split the garbage fee into a dedicated fund which guarantees that all of the money collected by this fee goes directly to serving the public with garbage collection services. Based on the foundation set fourth in the Solid Waste Management Plan, we will be undertaking a detailed review of the fee structure in the coming year with the continued goals of increasing fairness, increasing recycling and waste avoidance rates, decreasing costs, decreasing litter and public dumping, and providing consistent, reliable service.

It is also important to note that the 2019 budget marks the peak of debt obligations under the Troy MAC, which has been a major burden on municipal finances ever since it's creation to avoid bankruptcy in 1995. Thanks to the sound financial planning by the Mayor and Comptroller's office over the past two years, the Council was able to pass a budget which funded this one year increase of more than $600K in debt payments without significant impacts on taxpayers.

Please contribute your ideas and suggestions for the year ahead using the suggestion box below: